Basic Training in the US Navy 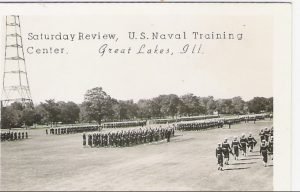 After completing the basic training, a recruit enters into the US Navy. A recruit undergoes an intense course, where they will learn about naval history, how to act in the event of an emergency, and how to handle life rafts amongst many other practical skills required for proper seamanship. During Basic Training in the US Navy, a recruit’s physical and mental limits will be tested during battle stations and other military simulations. During this training, the recruits will also undergo a range of medical and psychological exams, as well as haircuts and other grooming processes.

Follow on Basic Training in the US Navy is devoted to physical training and classroom education. Recruits will learn how to use portable and fixed equipment in an emergency and will participate in firefighting and damage control activities. The final week of training includes an intense physical exercise regimen called Battle Stations. After completing these tasks, recruits must pass the first academic test of their careers and complete the first of many physical fitness tests.

After basic seamanship, recruits will be tested on their physical fitness by passing the PT test. During the course, recruits will practice shipboard watch standing and shipboard line handling. The USS Marlinspike will also test them on their ability to get underway and return to port. Each Sailor onboard will have a job as a firefighter on a ship. They must also memorize the General Orders and learn how to interpret them.

During week one, new recruits will receive their first orders. The second week will include classroom work in professionalism, test taking, and the Navy chain of command. During this week, the trainees will take their first written test. They will also have their first physical training. The final week of Basic Training is the time when they will have their graduation ceremony and prepare to enter specialize training or directly enter the operational Navy.

The second week of Basic Training is the most difficult and demanding part. During this week, the recruits will receive orientation, learn about shipboard safety and the basic training in the US Navy. They will be placed on a ship and given orders. They will have to undergo a range of physical and mental exercises. It’s important for them to be physically fit and well-prepared for the Navy.

The third week of training involves a balance of classroom work and on-the-job learning. In the first two weeks, trainees are expected to be in the cockpit of their ‘ship’ at all times, and they will have to monitor a fake gauge on the ship to ensure that it’s running correctly. They will begin to lose identification as an individual and begin seeing themselves as a critical part of a team – they will have to account for every member of their unit at the start and end of their training.

The second phase of the training is the “A” School. Recruits will spend extended time in this phase, where they will learn about different roles in the US Navy. They will also learn how to conduct patrols. They will also learn about the different types of ships and how to respond to emergencies. They will undergo the same process as sailors who have successfully completed their basic training. Once they’re in the program, they will undergo various tests.

During the first two weeks of training, recruits must complete swim qualifications. They must perform strength training and perform push-ups and curl-ups. They must also pass a swim qualification, which consists of a 50-yard swimming test and a deep-water jump. If their swimmers are not ready for these tests, they must take remedial courses. The final weeks of Basic Training in the US Navy are devoted to technical and academic training.

Recruit training in the US Navy is a very demanding course. It consists of hands-on learning in various fields, such as swimming and drills. Students will develop the required skills for military life while they are in the military. In addition to these, recruits will also learn about the core values of the military. These values will make them an effective leader in the future. This will enhance their leadership qualities and make them valuable members of their new environment. Graduates of Naval Basic Training often speak of pride in thier endeavors and bond with their fellow sailors for life.